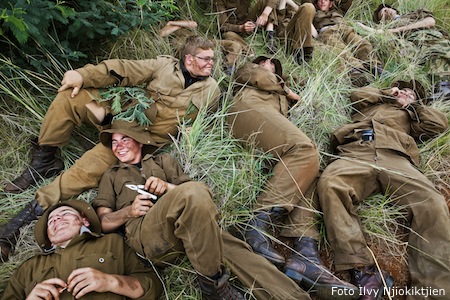 The international jury of the 2nd World Press Photo Multimedia Contest has given the First Prize to the production ‘Afrikaner Blood’ by Elles van Gelderen and Ilvy Njiokiktjien from the Netherlands. The multimedia production follows young white Afrikaner teenagers in South Africa who attend a holiday camp set up to teach them self-defense and how to combat a perceived black enemy.

The jury chair Vincent Laforet called ‘Afrikaner Blood’ “an incredibly well crafted and nuanced piece with a very cohesive structure and refined execution.” He added: “We as the jury appreciated the restraint that the authors demonstrated in the telling of this story. All of the multimedia elements and careful attention to detail served to push the narrative forward, as opposed to distracting from it.”

The judging was conducted at the World Press Photo office, where the jury viewed all the entries and discussed their merits over a period of four days. A total of 287 multimedia productions from 48 countries were entered in the contest, organized for the second time this year.

Managing director Michiel Munneke said: “This year, participation was open for photographers and producers and we are glad to have had such a broad field of entries from around the world. It is clear from the discussions with the jury that multimedia is continuously moving and developing and there are no set definitions yet. We are delighted that World Press Photo, through this contest, can contribute to the development of the medium and of the visual journalism profession.”

The prizewinning productions can be viewed here: www.worldpressphoto.org/multimedia-gallery/2012-multimedia-contest

Special Mention
In addition to the three prizes, the jury awarded the interactive multimedia production ‘Punched Out: The Life and Death of a Hockey Enforcer’ by The New York Times and videographer/photographers Shayla Harris and Marcus Yam with a Special Mention. Made over a period of six months, the production explores professional ice hockey player Derek Boogaard’s tumultuous life and untimely death from an accidental overdose of prescription drugs and alcohol.

Chair of the jury Vincent Laforet commented: “Several dozen videos, documents, and photographs found their way in what was a very thorough examination of the long-term health effects of bareknuckle fighting in the NHL and was delivered in a classic interface with straightforward navigation.”

Michiel Munneke explained, “Even if the contest concentrates on linear productions, we also wanted to make space for and reflect on new developments and trends and recognize excellence in the field of non-linear, interactive multimedia. For this purpose, we invited the jury members to nominate productions they felt would be interesting to consider.”

2012 Awards
Each winning team will be recognized with a Golden Eye Award and a certificate. In addition, the team awarded the first prize during the World Press Photo Award Days will receive a cash prize of €5,000. A representative of each of the winning production teams will be invited to Amsterdam to attend the 2012 Awards Days weekend and will receive the awards at the Awards Ceremony on Saturday 21 April 2012.

The World Press Photo multimedia contest is for online or offline linear productions with a journalistic storyline. Each multimedia entry must include professional still photography in combination with (but not limited to) audio and visual elements such as video, animation, graphics, illustrations, sound and text. The work has been judged on their impact as well as their production and content.