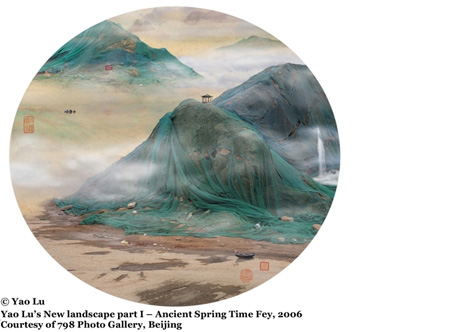 Born in 1967 in Beijing, the Chinese artist Yao Lu, represented by 798 Photo Gallery in Beijing, is the fifth winner of this major international award, after Czech artist Jitka Hanzlova in 2007, French artist Mathieu Bernard-Reymond in 2006, American artist Anthony Goicolea in 2005 and the Switzerland’s Jules Spinatsch in 2004.

Launched in 2004 in support of contemporary photography, the BMW – Paris Photo Prize celebrates this year its fifth edition. This Prize, open to living art photographers represented by galleries participating in Paris Photo, has become an important landmark in the world of international photography. The theme for 2008 was “Never Stand Still” in relation with the new BMW 7 Series.

Twenty of the 55 artists whose work was submitted by participating galleries were short- listed by a jury of international experts presided by Nicolas Wertans, Chairman of BMW France. The jury then worked to select the winning artist. The short-listed works are exhibited during Paris Photo, enabling visitors to enjoy and appreciate some of the finest examples of contemporary art photography.

Yao Lu is an emerging Chinese artist and teacher at the photography of department of the Central Academy of Fine Arts in Beijing. His work has been shown in numerous festivals and collective exhibitions around China (Lianzhou International Photo Festival 2007, New China Occidentalism – China Contemporary Art in Beijing in 2006, Pingyao International Photography Festival in 2004). But his work has rarely been shown in the West, except at the Fotofest International Houston in 2008, and at the “Space and Transportation” exhibition in Graz, Austria, in 1997.

The winning work “Yao Lu’s landscape part I – Ancient Spring Time Fey, 2006” is part of a series of digitally manipulated images of landscapes. The artist photographs mounds of garbage covered in green protective nets which he assembles and reworks by computer to create bucolic images of mountain landscapes shrouded in the mist inspired by traditional Chinese paintings. Lying somewhere between painting and photography, between the past and the present, Yao Lu’s work speaks of the radical mutations affecting nature in China as is it subjected to rampant urbanization and the ecological threats that endanger the environment.