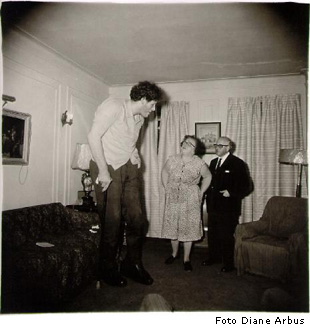 During Christmas holiday I had the privilege of visiting the highly anticipated Diane Arbus Retrospective in London of all of her collected works including pieces of diary notes, private books off her shelf, and old cameras through which she has granted the world a fascinating peephole into the borderlines of human society. In a way, as you entered the exhibition you were granted a private dialog with ‘Diane Arbus’ which to my belief is what Arbus, is all about. The exhibition in the Albert & Victoria museum brought up strong emotions from viewers that were all privately tangled together in the tale of this profound American photographer.

I have chosen to focus on one of Arbus’ famous images (which in the exhibition, was screened through her own enlarger!) and hopefully through this image tell the story of one of the most admired visual artist of our time: A Jewish giant at home with his parents in the Bronx, N.Y.1970.
Diane Arbus to this day remains the mystery of the world of photography and perhaps the one responsible for turning it into a well established, well recognized and highly effective medium of art expression. By focusing on the subjective matter of reference within the genre of portrait photography, instead of observing the world and nature in order to try to copy it in the most authentic and natural way possible (like the old masters of photography e.g. Ansel Adams), Arbus shifted the gaze inward granting us with a new form of public self-reflection. In a way she changed what was until her time a ‘stare’ at the world into a ‘gaze’ about the world. The former concentrated on the actual physical ‘seeing’ of the world. It meant to look and look again and to admire what we see with our eyes until it is transformed into the level of a fetish. Arbus took this human peculiarity and altered that ‘look’ into a gaze. She invites us to first glance at the world, then recognize what we see, then come back to the image to explore it further, to then come back to contemplating on that more and more. Through this method of seeing we might find ourselves trapped in a loop of world-artist-viewer-world. First there is a world, then, comes the artist who is fascinated by that world and attempts to copy it, to write it down. Then the artist wants to show his fellow human beings what he has learnt from the world. In turn, these fellow humans examine the world that the artist has presented to them and are refreshed and somewhat reborn into the world, for in some way their perception of the world has changed and so have they. In explaining her reasons for photographing, Arbus states: ‘I really believed there are things nobody would see if I didn’t photograph them.’
Arbus, together with August Sander are the ones who, in a way, ‘created’ Rineke Dijkstra. Arbus ‘explained’ to Dijkstra that it is alright to look within and to explore the depths of one’s own personality in order to, at the end come up with one kind of truth, one kind of reality. If we are not able to distinguish between different realities (‘But what is the truth…?’ kind of dialectic) then at least lets try to tell one of them, the one we are closest to and know best in the most close to truthful way. This has long been a tendency in the philosophy and arts of the twentieth century.

In the famous image of A Jewish giant at home with his parents in the Bronx, N.Y.1970 Arbus portrays through her unique mixture of cruelness and tenderness the giant Eddie Carmel with his aged parents. A possible socio-religious interpretation of the image-title might take us back in time to the biblical story of David and Goliath the giant. In the case of the biblical story however, the Jew, David, was the short, inferior ‘underdog’ and Goliath the Philistine, was the superior, ’the giant’. Before the battle Goliath yells to the Jews, ‘Choose a man from among you to come fight me. If he can kill me the Philistines will be your servants. If I kill him all of you will become servants of the Philistines.’ David eventually wins the battle with Goliath in order to become the next king of the Jewish people. In a fascinating twist of text-image relationship Arbus succeeds in encompassing within this art work, the result of this famous biblical battle. The image of A Jewish giant at home with his parents in the Bronx, N.Y.1970 reaffirms the outcomes of that battle; The Philistines became the servants of the Jews, in fact; In Arbus’s metaphor they have turned into Jews. Ironically, the biblical giant has turned from a Philistine giant into a Jewish giant. The fact that ’the old generation’ (the old parents in the image) are Jewish as well erases the traces in time of the Philistine presence and in a sense rewrites the past.

– Ohad Ben-Shimon is a student in photography at the academy of visual arts KABK in The Hague
• Read his earlier article on Rineke Dijkstra:
A Psycho-Social Approach (pdf)

PS:
During the research on Arbus I have also discovered that a Hollywood production is being made about the life and work of Arbus. Nichole Kidman is signed up to play Arbus and Robert Downey Jr. will play her husband Allan. The movie will be called ‘Fur’ and is planned to screen later this year. Just thought all you crazy Arbus fans would be delighted to see the unfolding of her life story on the big screen.
Two other interesting references to Arbus’ work:
• the website of the V&A museum
• a BBC radio broadcast about the exhibition