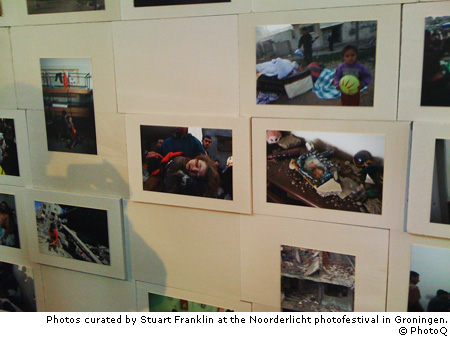 Today PhotoQ laid hand on the text written by Stuart Franklin that was meant to be published in the catalogue of the current Noorderlicht photofestival. As we wrote before, the text was drawn back from the catalogue after pressure from the press agency AP. The text was neither presented at the opening of the festival Saturday evening in the town of Groningen. The exhibition curated by Mr Franklin only showed a number of pictures by Palestine photographers working for AP (but there are also a number of pictures by photographers affiliated with other agencies, like EPA, Getty Images and AFP)
(Especially for the international public our Dutch website writes this news article in English.)

PhotoQ managed to get hold of the text by a third party. Neither the organisation of Noorderlicht, nor Mr Franklin delivered it to us.

AP stated August 31: "(…)his political commentary was unacceptable under the clear agreement that had led to AP’s involvement in the exhibition – namely, that the photos would not be presented in support of a political position."
On September 1 Mr Franklin commented on PhotoQ’s request: "Let me be clear: the aim of the exhibition at the outset was to look at the extraordinary work that the photographers who covered the recent Gaza conflict had done. I made no agreement with AP other than verbal indication, before going to Gaza, that my approach would highlight the photojournalism and be balanced. I have honoured this. Of course after visiting Gaza and seeing considerable amounts of new evidence emerging about this conflict I felt it my duty to contextualize the work with an historical appraisal of the conflict. No discussion was held with AP about text or their apparent right to censor my curatorial essay until a few weeks ago. Then we were all shocked."

We think that publication is relevant because it gives a clear insight in Mr Franklin’s motives. The interesting thing is that he describes the position of the Palestinian photographers risking their lives to show what needs to be shown and "whose pictures, glued to placards, were held up in the streets of Amman, Cairo, London, Paris and Tokyo in a multitude of demonstrations against the war. What we are seeing is not simply photojournalism at its most urgent, but photojournalism as a function of resistance to a nation’s obliteration – as a ‘weapon of the weak’."

This is not the first text that Stuart Franklin wrote and that was rejected by AP. Later he wrote this second text that was planned to be published in the catalogue. Franklin mailed us after we asked him: "This is an updated version written about 3 weeks ago, but very similar. I added the sentence about The Lancet and the last para about the 4th Geneva Convention and war crimes at the end. 90% is identical. AP objected to any version that included words like disproportionate or that contained my views of the conflict, even with the offer of a disclaimer."

Read, and draw your own conclusions:

Three motives have inspired this exhibition. One, the resilience of the Palestinian people, which remains undiminished after forty years of resistance to disempowerment of the Palestinans. Two, the fury I have felt at the increasing levels of excessive violence and disproportionate force that one of the world’s largest armies has brought to bear on lightly armed resistance fighters and unarmed civilians. Three, the extraordinary commitment of a handful of Palestinian photographers living along the Gaza Strip whose photographs moved the whole world at the end of 2008 and during January 2009, and whose pictures, glued to placards, were held up in the streets of Amman, Cairo, London, Paris and Tokyo in a multitude of demonstrations against the war. What we are seeing is not simply photojournalism at its most urgent, but photojournalism as a function of resistance to a nation’s obliteration – as a ‘weapon of the weak’.

There is atrocious cruelty evident on both sides of this long-running conflict: from the Palestinian bus bombing in Haifa to the suicide bombs and attacks during the Second Intifada that killed 317 Israelis, and from the Israeli side too, where we can trace a history of merciless cruelty in this long-running conflict, from the sinking of the USS Liberty and the napalming of its lifeboats during the Six Day War, to the invasions of Lebanon in 1978 and 1982 and the destruction and loss of civilian lives there, to alleged Israeli collusion in the Sabra and Shatila massacres.

Then there were the Intifadas, or uprisings, where unarmed civilians were met with disproportionate force and live ammunition. Then there were the television images the whole world saw of the shooting dead of a twelve year old boy, Mohammed al-Durra, as he is cradled in the arms of his father – and then falls limp. Both were squatting against a wall, hiding from the gunfire. How could any parent bear to watch these scenes and not be moved? And then just after Christmas last year the world watched another terrible and disproportionate attack on the Palestinians. Several incidents during the recent Gaza conflict were described by Israel’s own soldiers, at a seminar addressing the Israeli military college, as – simply – “cold-blooded murder”. The International medical profession expressed their collective outrage, especially at the numbers of women and children killed and injured in Gaza and the targeting of medical staff, in a furious editorial in The Lancet.

On top of that, the destruction and demolition of homes and the growth of settlements on Palestinian land has added to the feeling of hopelessness that engulfs most Palestinians. When the Israelis excluded all foreign journalists from entering Gaza to report on the war, the role of witnesses to the conflict was placed entirely on local journalists, photographers and television crews. No easy task. Three weeks of attacks left five reporters dead and many more came close. The overwhelming majority of the local photographers who I interviewed were married men with young families, who each morning, setting off to cover the conflict, kissed their wives and children as if for the last time. Their commitment to keep going – even when their apartments were bombed and their friends were killed or wounded – was remarkable.

Palestinian nationals stand alongside the many races, cultures, religions and nations that have been exposed to systematic ethnic cleansing, most memorably Native Americans, the Australian Aboriginal peoples, the Armenians, the Jews, the Kurds and the Kosovars. This exhibition extols the documentary power of Palestinian photography and its role in conveying the outrage of the oppressed. During preparations for this exhibition some expressed fears that this would be politically biased or one-sided. It is not. I show the pictures of the Qassam brigades preparing their missiles to fire at Sderot on the 20th and 24th of December. I recognize these small attacks precipitated the conflict, but once again the needless violence of the response of the Israeli army on the civilian population violated both the “principle of proportionality” and the “principle of distinction” (between combatants and civilians).

And I want to say here and now that when it comes to ethnic cleansing those who expressed fears about my intentions were right. I am biased, not on one side or the other of a political divide, but on the side of justice, human rights and International Law – of the 1949 Geneva Convention and the 1977 Additional Protocols.