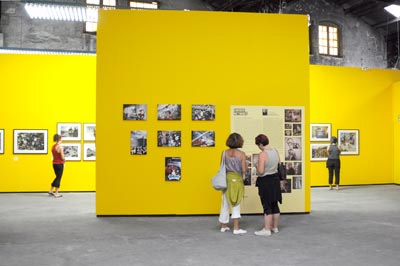 Crowds of visitors occurred over three different periods: 13,000 professionals attended the opening week, a great flow of visitors remained throughout the summer with a record week around 15th August (8,500 visitors) and over 8,200 students, 630 teachers and 270 classes during Back to School with Images in September.

This 42nd edition confirms the Rencontres d’Arles photography festival’s place as a unique hub for professional exchange as well as an educational platform for a very wide audience, which is curious about photographic creativity of all kinds.

The very strong media coverage in France and abroad made it possible to communicate on highlights and main guests of this year’s programme. International press coverage increased from last year.

47 exhibitions made up the Rencontres d’Arles 2011 programme. Among these, 34 were produced or co-produced by the festival; and 13 were hosted in association with the Rencontres (Le Méjan, Foam, the Musée de la Chasse et de la Nature, l’ENSP, SFR, Scéren CNDP-CRDP, Galerie VU’). The group exhibition From Here On, alone featured 36 artists.

6,000 people took part in JR’s «Inside Out» project, getting their picture taken in a photo booth specially installed at the Grande Halle, post them up afterwards in protest of a personal cause.

More than 7,000 spectators attended the evening events at the Théâtre Antique, an average of 1,700 people per night. The 7th Night of the Year was held for the first time inside the Arena, drawing nearly 5,400 people for a big, free walkabout from 10pm to 3am, around 16 screening spaces dedicated to 36 agencies, collectives and magazines. If the screening rooms where not considered very comfortable, the projected photographs met great success.

Over the past several years, the Night of the Year has enjoyed resounding international success. This spring 2012, it will be presented at the Photo Spring Festival in Beijing and at the Photo Fest in Tbilisi, Georgia for the third consecutive year.

The seminar “Photography: The Internet and Social Network”, organised with support from Connaissance des Arts and Rue89, was held at the Théâtre d’Arles from 6-8th July and drew more than 750 participants, a daily average of 250 participants.

The 2nd edition of the Rencontres Village, held from 4-10 July, brought together nearly 30 publishers, bookstores, institutions and companies and attracted approximately 8,000 visitors.

The photo folio reviews welcomed 226 photographers, who came for critiques and advice from 112 international experts. This 6th edition was organised with support from Fnac, Olympus and Images Magazine. Following the experts’ vote, Sylvia Ballhause was selected by the judging panel to have her work shown at Fnac’s in-store galleries and at the 2012 Rencontres d’Arles, following the footsteps of 2010 winner Augustin Rebetez.

The 35 photo workshops, led by renowned professional photographers, drew 360 participants in April, July and August (+20% vs. 2010), 36% of them from abroad. The photo workshops take place throughout the year with discovery formulas during weekends.

128 daily guided tours were held through the summer, attracting 1,600 visitors. In parallel, specific, free tours were run for local people in conjunction with social centres, homes for the elderly, and neighbourhood associations.

The Historical Book Award (€8,000) went to Works de Lewis Baltz and to its publisher Steidl (Goettingen, Germany, August 2010). The Book Awards jury gave a special mention to Verna Posever Curtis, Photographic Memory: The Album in the Age of Photography(Aperture, New York, USA, May 2011).

Since their creation in 2002, the Rencontres d’Arles awards have been supported by the LUMA Foundation.

Frédéric Mitterrand, the French Minister of Culture and Communication visited the Rencontres d’Arles exhibitions and attended the closing ceremony at the Théâtre Antique on Saturday 9th July 2011. During a press conference, he also presented the Minister’s new cultural initiatives, a testament of his commitment to all aspects of photography in France (cf press release from the Minister of Culture).

The budget of the 2011 Rencontres d’Arles was €5.5 million excl. VAT. 46% of which came from public funding, 37% from own revenues (mainly from ticket and merchandising sales) and 16% from private partnerships. The average price for a ticket is €27 for 47 exhibitions. Entrance to the exhibitions is free for visitors under 18, residents of Arles, members of RSA, AAH, ASS and people with limited access abilities.

The Rencontres d’Arles are deeply grateful for the active support of all the festival’s public and private partners, for their enthusiasm, trust, dedication and loyalty, which contribute to the festival’s success.