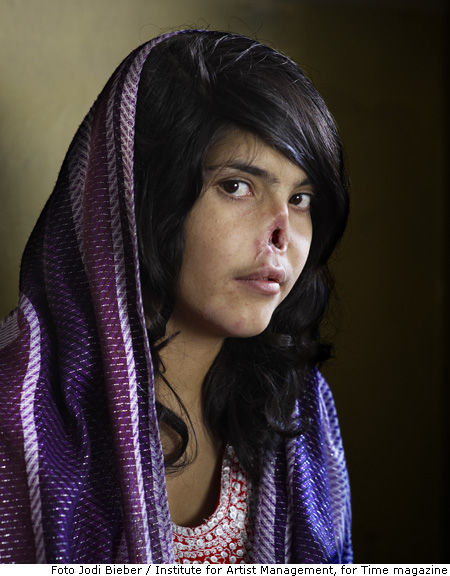 The international jury of the 54th annual World Press Photo Contest has selected a picture by Jodi Bieber from South Africa as the World Press Photo of the Year 2010. The portrait of Bibi Aisha was also awarded First prize in the category Portraits Singles in this year’s contest. It was shot for Time and was featured on the cover of the 1 August issue of the magazine.

Her winning picture shows Bibi Aisha, an 18-year-old woman from Oruzgan province in Afghanistan, who fled back to her family home from her husband’s house, complaining of violent treatment. The Taliban arrived one night, demanding Bibi be handed over to face justice. After a Taliban commander pronounced his verdict, Bibi’s brother-in-law held her down and her husband sliced off her ears and then cut off her nose. Bibi was abandoned, but later rescued by aid workers and the American military. After time in a women’s refuge in Kabul, she was taken to America, where she received counseling and reconstructive surgery. Bibi Aisha now lives in the US.

Jodi Bieber has previously won eight World Press Photo awards and is only the second South African photographer to win the highest honor in the contest. She is a former participant of World Press Photo Joop Swart Masterclass where she returned as a master in 2010. Bieber is represented by Institute for Artist Management and Goodman Gallery.

The conclusion of the jury
Jury chair David Burnett said: ‘This could become one of those pictures – and we have maybe just ten in our lifetime – where if somebody says “you know, that picture of a girl…”, you know exactly which one they’re talking about.’

Juror Ruth Eichhorn commented: ‘It’s an incredibly strong image. It sends out an enormously powerful message to the world, about the 50% of the population that are women, so many of whom still live in miserable conditions, suffering violence. It is strong because the woman looks so dignified, iconic.’

Juror Vince Aletti said: ‘It’s a terrific picture, a different picture, a frightening picture. It’s so much about not just this particular woman, but the state of women in the world.’

Juror Aidan Sullivan said: ‘Part of what the World Press Photo contest does is to take pictures to a wider audience, an audience that is going to ask why? And this photo makes people ask “What on earth…?” “What’s going on…?” “What has happened…?” For me, this was the picture that asked the most important questions.’

This year, a record number of 108,059 images was submitted to the contest. The number of participating photographers was 5,847, representing 125 different nationalities.

The 2011 jury
The two-week judging period brought together 19 picture editors, curators, photographers and representatives of press agencies from around the world. The members of the 2011 jury were:

Special Mention
Following the judging of the contest, the jury decided to name a Special Mention to a 12-picture series of photographs made by the miners trapped for 69 days inside the San José mine in Chile, 700 meters underground, before they were rescued on 13 October.

The pictures show the difficult conditions inside the mine and feature one of the men, Eduardo Peña, a keen runner who kept up his exercises underground. Writer Dan McDougall and photographer Adam Patterson spent weeks with the Peña family before he was rescued and began corresponding with him by letter. McDougall and Patterson were able to send Peña a pair of running shoes and a small digital camera down into the mine shaft where he was trapped. Panos Pictures is licensing the pictures on behalf of Eduardo Peña.

Jury member Abir Abdullah said: ‘This recognition opens up the possibility of showing citizen journalism, when professional photographers have not had the opportunity to be some place, but because of technological development, someone can record it….it brings us into a new era that challenges professionals, and this is a good example of a photo from a place where a photojournalist could not possibly have been.’

Jury member Vince Aletti said: ‘We are able to see the conditions…the images respond to our curiosity in a vivid way.’

The jury considers a visual document for a Special Mention when it has played an essential role in the news reporting of the year worldwide and could not have been made by a professional photographer.

Awards Days and 2011 exhibition
Jodi Bieber, the photographer of the World Press Photo of the Year 2010, will receive her award during an awards ceremony in Amsterdam on Saturday, 7 May 2011. The award also carries a cash prize of €10,000. In addition, Canon will donate a Canon EOS Digital SLR Camera and lens kit to Jodi Bieber. Maurice Lacroix, a Swiss watch manufacturer, is the official watch partner of the World Press Photo Awards Ceremony.

The awards ceremony is preceded by a two-day program of lectures, discussions and screenings of photography. The exhibition of prize-winning photography will be shown at the Oude Kerk from 22 April to 19 June and subsequently visit over 100 locations around the world. For a provisional exhibition schedule, visit: www.worldpressphoto.org/exhibitions.

World Press Photo receives support from the Dutch Postcode Lottery and is sponsored worldwide by Canon and TNT.