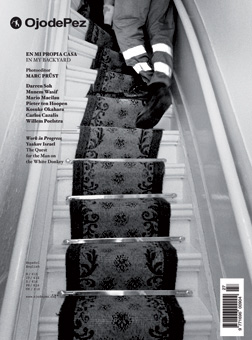 In my back yard is the proposal for OjodePez of Marc Prüst, curator and independent consultant who have work for the exhibition department of World Press Photo Foundation and for Agence Vu as a cultural activities director.

Marc Prüst reflects about what motivated photographers to finding issues always seem to be on the other side of the world. However, "all the photographers in this dossier address issues and tell stories they found close to home. This allowed them to go deeper, to understand better what needed to be addressed and docuemented". Prüst says: "to address issuel, one needs access and an undestanding of the situation, the people, and society. And that takes time and investment and is perhpas only made possible by photographers who work in a country, in a society they know best-their own backyard".

Darren Soh portraits the troubled relationship between Singapore and Malaysia with his story on the SS24 last depart, the last passenger train ever which ran from Singapore to Kuala Lumpur and that was for years owned and operated by Malaysia, althought it was placed in Singapore territory. In June 2011, the railway station and land was finally returned to Singapore.

Munem Wasif shows us Old Dhaka, how a ordinay world unravel in a new world to be explored. Custums and old world lifesty reveal all the bonds of belonging thanks to the images of this photographer from Bangladesh who analyse the neibourghood where he grew up.

Mario Macilau, a photographer from Mozambique, analyze at The zionist one of the Old African religions in Mozambique, widely extended and known for healing diseases, weaknesses, pshychological and spiritual problems.

Pieter ten Hoopen belives that a high standard of living is no automatic garantee of hapiness in live and he gives as example Stockholm, one of the wealthiest cities in the world, bu at the same time it has the highest percentage of people who live alone. In Stockholm, Ten Hoppen portraits that loneliness and their yearning form contact.

Kosuke Okahara (Japan, 1980) portraits in his feature Ibasyo the case of a woman that resort to self-mutilation to reach a mental state that makes them feel safe and in peace.

Carlos Cazalis: Mexico City Water explores the paradoxes of the lack of availability of drinking water in some of the poorest neighbourghoods in Mexico City, while at the same time they coexits with the floods due to the poor and old managementon water storage.

Willem Poelstra (Netherlands, 1956) is the author of the series Too close to not discomfort, a tribute paid to the ambulance service in Amsterdam and the medical team working hebind the scenes.

La Fabrica: OjodePez #27 invites to look into our backyard