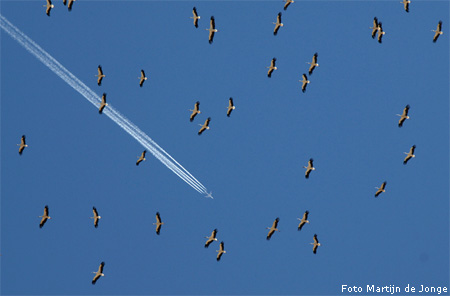 The competition is owned by London’s Natural History Museum and BBC Wildlife Magazine and regarded as the international leader in the artistic representation of the natural world. This year it attracted a record 32,351 entries from 82 countries.

Among the 83 best images chosen for exhibition is a photograph by Martijn de Jonge from Amsterdam. The exhibition includes all the winning, runner-up and commended photographs from the competition’s 17 categories. The category winners and overall winners – Wildlife Photographer of the Year and Young Wildlife Photographer of the Year – will be announced at an awards ceremony on 29 October, two days before the exhibition opens at the Natural History Museum. It tours regional and international venues including some in the Netherlands after its London debut.

Martijn captured his awarded image on a hot August morning at a waste disposal site in Extremadura, Spain. The area is a vital feeding station for migrating white storks as they head south to their wintering grounds. A plane slashed across the azure sky, as the storks flew overhead, crossing the migration path. This photograph is a clever and ironic contrast between powered and non-powered flight.
‘In my photography, I focus on the relation between man and nature in our world,’ says Martijn.

Competition judge Cristina Mittermeier said: ‘The juxtaposition of wild and man-made birds in flight perfectly illustrates the delicate balance humans and nature must achieve if we are to thrive together on earth.’

Last year, the exhibition at the Natural History Museum attracted nearly 134,000 visitors. More than a million others are expected to have seen the 2007 images at international and regional venues when the tour concludes.
Wildlife Photographer of the Year Competition spokesperson Heather Clark Charrington said ‘Over 44 years, this has grown to become the world’s most prestigious wildlife photography competition. We are not only attracting record entries, but also huge audiences. People come to see the world’s best wildlife photographs, but they also gain new insights. Many of the images will challenge viewers to think about our natural world in different ways, which is central to the Museum’s mission.’

Chair of the judging panel, Mark Carwardine, said ‘The judges spend weeks in a darkened room, looking at thousands of beautiful images, but the final exhibition photographs have a creativity, originality and sheer drama that set them apart. The competition plays an increasingly crucial role in raising the profile of wildlife photography and generating awareness of conservation. Nothing speaks louder than an evocative photograph that stirs the imagination, tugs at the heart strings and engages the mind.’