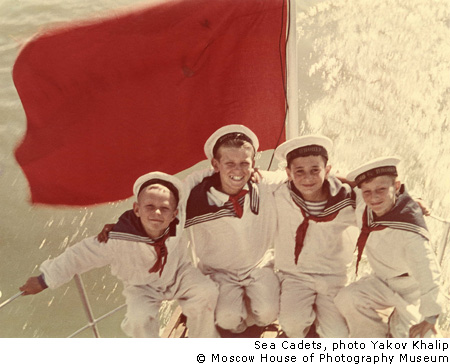 Primrose – Russian Colour Photography is an exhibition in Foam, Amsterdam (until Apr. 4, 2013). It can be viewed from several photographic angles, but also as a journey through Russian history. Curator Olga Sviblova, director of the Multimedia Art Museum in Moscow, talks about five photos from the show, some of them rarely seen outside Russia. Videos produced by Crystal Park New Media.
About a famous portrait of Leo Tolstoi by Sergey Prokudin-Gorsky, made on May 23, 1908:

About a photo never shown before outside Russia: a portrait Aleksander Rodchenko made of his assistant and mistress, Evgenia Lemberg (also shown in his famous photo Girl with a Leica):

About photos Ivan Shagin made for magazines of fruit; Sviblova remembers her own years as a child when good food was rare, and fresh lemons were a festive treat:

About a photo by Yakov Khalip, a birthday present for Rodchenko in 1951; never published before this exhibition:

About a photo by Dmitry Baltermants – famous for his war photos – made on the streets of Moscow, during a period of relative freedom in the USSR around 1960: