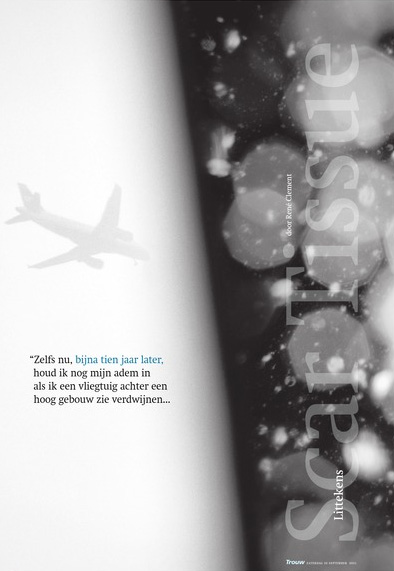 Scar Tissue is New York based photographer René Clement’s latest project. Scar Tissue focuses on events surrounding the tenth anniversary of the 9/11 attacks on New York City, and will be a 40-page newspaper containing pictures and interviews. Ten thousand copies of Scar Tissue will be distributed free of charge on September 11th at Ground Zero, around the time of the memorial service. This newspaper has been created in collaboration with the Dutch newspaper Trouw and will be simultaneously published in Dutch in the Netherlands, as a September 10th supplement. The editorial is written by Stevo Akkerman, Chief Foreign Editor of Trouw and the other articles are written by Bas den Hond, freelance writer affiliated with Trouw. Graphic design was done by Frank Castelein, Chief Photo Editor of Trouw. The Belgium newspaper De Tijd will also publish Scar Tissue.

Clement has spent the last twelve months creating this pictorial study of his hometown as it continues to recover from the 9/11 tragedy, ten years later. “Because the 10th anniversary of 9/11 is such an important milestone for New York, I believe that a more comprehensive review was needed.” said Clement. “In New York, issues relating to the building of an Islamic Center near Ground Zero revealed to us that raw emotions are still bubbling just below the surface. In addition, while many affected people resumed their daily lives, first responders are still dying in great numbers from the toxic dust they inhaled while working at Ground Zero,” he added.

René Clement is a photojournalist based in New York City. A native of the Netherlands, Clement is the co-founder of Borax Foundation for Photography in Nijmegen, Netherlands, and a contributor to Hollandse Hoogte Agency in Amsterdam and Polaris Images in New York. His work has been published throughout the world. His portrait photography and documentaries have been awarded numerous prizes including Time Magazine Picture of the Year and the Dutch Silver Camera competition. Earlier this year, Clement published ‘Promising Land – Land vol Beloften’, a book about Dutch Americans in Iowa. Promising Land has just been awarded the second runner-up prize in the fine arts category of Blurb.com’s annual international competition for photography books.