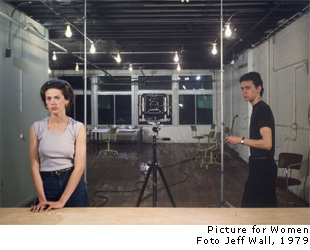 I choose to focus on Picture for Women from 1979 which relates to the social issue of ‘The male gaze’ (1), especially the relationship between the male photographer/artist and ‘his’ female model.
The title of the photograph, Picture for Women, also hints in that direction. This photograph also refers to the famous painting by Edouard Manet’s A bar at the Folies-Bergeres from 1881-82 which Wall drew his inspiration from whilst studying in London and frequently visiting the museum in which this famous Manet painting was exhibited in.

On coming back to the image of Picture for Women we are presented with a scene that is happening either in a studio or in fact in a class-room. In this scene there are three bodies. One of the female model, one of the male artist and one of the camera. In a way they are all performing for us, the spectators. Wall has suggested with this image that we place ourselves in the position of the camera for we are to observe this sort of performance in front of the mirror. David Campany who is a Reader in the History and Theory of Photography at University of Westminster says (2) that the fact that there is actually a mirror in that space is dubious.

We might imagine that this is actually a reflection from a mirror because of the 2 thin pillars which visually form 3 pieces of mirror like surfaces, however the photograph could have been taken with a second camera positioned in front of this scene. The fact that we initially assume that this is a mirror is what Wall intended. We are to observe a reflection of the world, of the male-female power relations, of us as spectators of this whole scene and to imagine what it would be like to be there, to stand in front of this ‘mirror’, to be part of this world. However we are not. This is where Wall becomes ‘fictional’. We are (or at least we were in the late 70’s) a very male orientated society of observers. The male gaze has dominated culture, politics, art and society in a way that it has become impossible to portray an image for women, A Picture for women, except, in imagination.

(1)
The tendency in society to construct and focus on the way the male observer sees reality in discrimination of the female gaze.
(2)
Watch the first url under the p.s.

p.s Very Interesting links to Wall’s Retrospective exhibition in the Tate Modern, London this last Christmas (You can actually watch Wall talk about his works in the exhibition for 2 hours and see a symposia of different ‘art-experts’ and what they think of Wall’s work!):
• www.tate.org.uk/onlineevents/webcasts/jeff_wall_symposia/