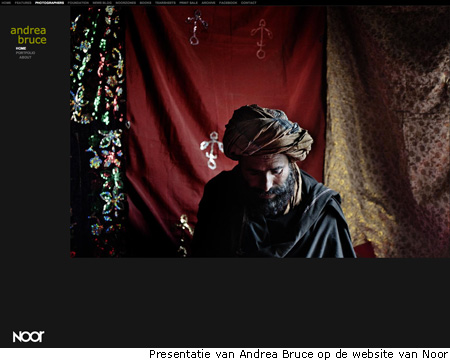 ANDREA BRUCE
Andrea Bruce is a documentary photographer based in Kabul, Afghanistan.

Through documentary photography, Andrea brings attention to people living in the aftermath of war. She concentrates on the social issues that are sometimes ignored and often ignited in war’s wake.

For eight years she has chronicled the world’s most troubled areas, focusing especially on Iraq and Afghanistan. She started working in Iraq in 2003, as a staff photographer for The Washington Post, following the intricacies and obstacles of the conflict experienced by Iraqis and the US military. She also wrote a weekly column for The Post called "Unseen Iraq."

Andrea?s awards include top honors from the White House News Photographers Association, several awards from the International Pictures of the Year contest, and the prestigious John Faber Award from the Overseas Press Club in New York.
In 2010 she received the WHNPA grant for her work in Ingushetia. This year, she has been a finalist for the Aftermath Project grant and a recipient of the Alicia Patterson Foundation Fellowship.
Andrea is available for photography and multi-media assignments.

A showcase of her work and projects and her full biography can be viewed on the NOOR website: http://www.noorimages.com/photographers/andreabruce/. Andrea?s archive will be integrated into NOOR?s online archive http://archive.noorimages.com in the coming weeks.

GIANCARLO CERAUDO
Giancarlo Ceraudo is a documentary photographer based in Buenos Aires, Argentina.

For ten years he has been documenting social, cultural, health and human rights issues with a focus on Latin America.

His most ambitious and personally rewarding work has been “Destino Final”, a recently completed reportage and multimedia project that uncovers the crimes committed by the armed forces during the Argentinean dictatorship. Through painstaking research and human rights investigation,in collaboration with journalists Miriam Lewin, an ex desaparecida, and Enrique Pineyro, a former Argentine pilot, "Destino Final" has helped to identify and to bring to trial several pilots responsible for the notorious and infamous “death flights”.
Destino Final will be published by Schilt Publishing in 2012.

Giancarlo?s work has been widely published in Italian and International publications including L’Espresso, Internazionale, El Pais, GEO and National Geographic. His images are part of the collection of the Maxxi (National Museum of 21st Century Arts, Rome) and have been exhibited in galleries throughout Italy, Spain, France and the United States.

Other publications include: Frontiera Sud (Fandango Publisher, 2004), which investigates immigration between Morocco and Spain and was produced in collaboration with historian Stefano Simoncini. “Made in Italy” (Trolley Books, 2005) a collective reportage on the work environment in Italy.

Giancarlo has an academic background in anthropology and has worked in Argentina,Chile, Bolivia, Brazil, Paraguay and Uruguay. Since 2008 he has been working on a long-term project documenting the changes in Cuba since the passage of power to Raul Castro.

A showcase of his work and projects and a more extensive biography can be viewed on the NOOR website http://www.noorimages.com/photographers/giancarloceraudo/. Giancarlo?s archive will be integrated in NOOR?s online archive http://archive.noorimages.com in the following weeks.

ABOUT NOOR PHOTO AGENCY
NOOR photo agency collectively and actively promotes, markets and sells the work of its member photographers. NOOR produces visually distinctive and up-to-date photographic and multimedia reportage on news and culture. NOOR?s images are published in the world’s top magazines, compiled as books, exhibited in art galleries and collected by museums.
NOOR?s archive is represented by Apeiron on the Greek market, by Bildbyran Silver on the Swedish market, by Cordon Press in Spain, EK Pictures in Poland, Felix Features in Norway, laif on the German speaking market, LUZ in Italy and by Redux in the United States.

ABOUT THE NOOR FOUNDATION
The NOOR Foundation is an international non-profit organization creating and distributing compelling photojournalistic works with the aim to raise awareness, enhance an understanding of the world and to contribute to the visual history of mankind.
The foundation facilitates the production of photographic projects through (public) exhibitions, publications, and other (online) activities, stimulating public dialogue.
Photojournalistic educational initiatives are at the core of the foundation’s activities.