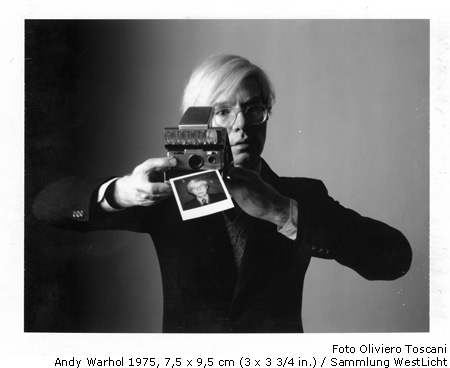 Formed between 1972 and 1990 by Polaroid, the legendary International Collection disappeared for 20 years in the archives of the Swiss Musée de l’Elysée in Lausanne.

Peter Coeln, owner of the WestLicht Museum, has now saved the Polaroid Collection which had been put on the market by the liquidators dealing with the assets of the insolvent company. For almost two years the future of the unique Polaroid collection was fairly uncertain. The spectacular acquisition at the last moment secures the continued existence of this historic collection and presents it to a broad public for the first time.

The future of the yet hidden analog treasure is thus not only saved but also brighter than ever before. After all these years the collection is finally going to be reconnected with its original concept. Dr. Florian Kaps, founder of the Impossible Project, says: “Most important is the fact that we finally found a perfect solution for not only celebrating the incredible potential of all the existing artworks, but that we also formed a great setup to re-start the original concept by inviting contemporary artists to join this ongoing project by supplying them with the new generation of Impossible instant films”.

The first impressions of this collaboration will proudly be presented at WestLicht from June 17th, 2011. This exhibition will for the first time show a complete representative profile of the traditional collection, displaying never before shown pieces. Combined with the first results of the new Impossible Collection, the magic of instant photography will be lifted onto the next level.

During the late 1940s the physicist and Polaroid founder Edwin Herbert Land invented the instant film process, which was a revolution for photography. In the following decades the technique was booming. Having the processed image in original size shortly after shooting, as well as the fact that each Polaroid is a unique copy, remains fascinating until today -despite digital technology. Estimated 300 million Polaroid cameras are still in use worldwide. Right from the beginning of his invention Land invited famous photographers and artists to experiment with the material. The company built two unrivaled collections, one based in Europe and the other in the United States. After Polaroid’s insolvency in 2008 both collections were at risk of being torn apart. Sotheby’s in New York auctioned rarities from the American collection in 2010. Due to the commitment of Impossible and WestLicht, the European collection was saved from suffering the same fate. The eye catcher of the collection are the 1.400 large format Polaroids (20×24 inch). These images were taken with a special custom made camera and film material not available on the market. Czech photographer Jan Hnizdo, chief operator of Polaroid, travelled to selected photographers and artists with this camera. Conceptual art such as collages, opulent arrangements and trendy staging reflect the zeitgeist of the 70s and 80s. Next to the big names, there are also many works of outstanding photographers unknown on the art market until now. “I am both happy and proud,” Peter Coeln says, “that it was possible to keep the collection intact in its entirety and make it finally accessible.” The surprise coup was realized in a very special year for the museum. In 2011 WestLicht celebrates its 10th anniversary.

About WestLicht. Museum of Photography
WestLicht encompasses an exhibition venue for photography and photographic art, a historic camera collection, an auction house and an extensive library specialized on photography. The co-existence of art, science, and technology, in a relaxed and stylish atmosphere makes this space unique on the cultural landscape of Vienna. The exhibition program covers the whole spectrum of photographic genres and subjects. Young contemporary artists are presented, as well as better known positions, such as Ansel Adams, Thomas Hoepker or Nobuyoshi Araki. Themed or historic exhibitions and the internationally touring World Press Photo also make up a vital part of the WestLicht showcase. With its impressive profile and approximately 60.000 visitors a year, WestLicht has established itself as the hotspot for photography in Austria. Learn more at www.westlicht.com