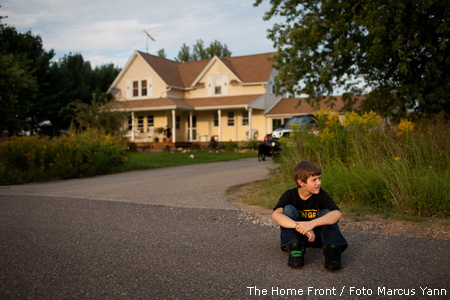 The nominated work was judged on its impact and editing, as well as its originality and innovative execution. The productions must have a journalistic storyline and still imagery must play a significant role in telling the story.

Judging took place at the World Press Photo office in Amsterdam from 18 to 21 March 2011. The jury for the 2011 multimedia contest consists of five highly respected professionals in visual journalism and multimedia productions. The members of the jury are:

1st Prize
The Home Front
A production with photography by Marcus Yam and produced by Nancy Donaldson, Catrin Einhorn and Meaghan Looram for The New York Times.
The Home Front is the story of two boys in the US who struggle to adjust when their father, a single dad and US soldier, is deployed to Afghanistan and they are sent to live with relatives.

Jury statement:
This production embodies many of the simplest and most powerful elements of storytelling; great subjects that are articulate and emotional, a narrative arc with a transformation – actually two in this story – a bigger issue of both political and social significance embodied in the micro story, strong video and photography and a compelling visual and audio narrative that worked powerfully in concert with each other.

2nd Prize
Blanco
A production by photographer Stefano De Luigi and VII Photo Agency.
Blanco is the result of a four-year journey delving into the life of the visually impaired in 16 countries around the world.

Jury statement:
This production is a beautiful example of conceptual multimedia work, without a linear narrative based on the voices of subjects that have been interviewed, but relies solely on beautiful and powerful imagery combined with a haunting soundtrack. The editing and production are key to this work. The concept and execution at the heart of this works successfully, which helps expand the language and possibilities of what this medium has to offer for creativity and for our audience. Yet, this work is about a serious subject that is an issue for millions of people around the world. Blindness.

3rd Prize
A Man in the Forest
A production by Lei Wang.
A Man in the Forest is about a forest ranger that has lived in Hainan province rainforest in China for several years, working to monitor and protect the Hainan Black-Crested Gibbon.

Jury statement:
From China, this work signifies the more global development of this form of storytelling. The story itself utilizes the universal elements; a strong central character whose story is told in an intimate and sympathetic way, an environmental issue highlighted through that character’s concerns, a nice use of video and photography to create a solid visual narrative, excellent graphics and a certain sense of humor in parts.

1st Prize
Prison Valley
A production with photography by Philippe Brault in collaboration with author and co-director David Dufresne and produced by Alexandre Brachet and Gregory Trowbridge for Arte.
Prison Valley in an interactive production that explores the prison industry in Cañon City, Colorado in the US.

Jury statement:
This production is a magnum opus visually, conceptually and in terms of the reporting and information offered. It is also an example of immersive interactivity, where the viewer can take a journey that they control, learning new information along the way. This work should be a challenge to everyone producing non-linear multimedia to raise their standards in terms of how the technology can be utilized.

2nd Prize
Powering a Nation
A production with photography by Mike Ehrlich, Jessey Dearing, Lauren Frohne and Elena Rue and produced by Laura Ruel, Chad Stevens and Don Wittekind from The University North Carolina at Chapel Hill.
Powering a Nation is an interactive production that explores energy use across different demographics in the US.

Jury statement:
This is an excellent example of advocacy journalism, where the whole package has the potential to educate and raise policy awareness. Through a combination of strong graphics, a relatively easy to use navigation system, a wide array of content ranging from short narrative linear multimedia pieces, to graphs, photography, maps, games and other interactive elements, the viewer can learn about the issue, get absorbed in the stories and become activated into the issue.

3rd Prize
A Year at War
A production with photography by Damon Winter and Marcus Yam and produced by James Dao, Gabriel Dance, Nancy Donaldson, Catrin Einhorn, Rob Harris, Meaghan Looram for The New York Times.
A Year at War examines the yearlong deployment of one US battalion in Afghanistan.

Jury statement:
This ambitious project did a very strong job of showing the impact of going to war on a group of American soldiers deployed to Afghanistan and through a series of short linear narratives, photography, materials contributed by the soldiers and their families and other interactive elements including maps and graphics, allows the viewer to get immersed in an intimate way.